Harry’s House is our Home 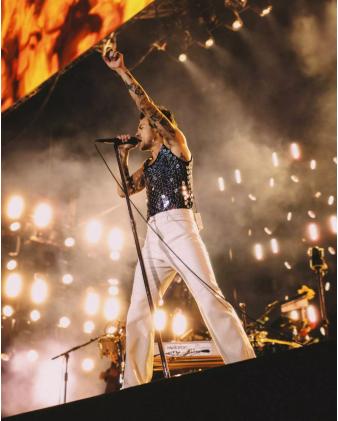 Harry Styles on June 19th, 2022 Love on Tour in London at the Wembley Stadium

Harry Styles is a very well-known artist, his career started on the X-Factor with One Direction, and now he is ranked 4th in the world according to Spotify. He recently released his fourth solo album titled Harry’s House, and his fans went crazy for it. The album is 41 minutes and 59 seconds long and has a 13-song tracklist.

I think that the album is very good, it has a different feel than his previous albums, they’re a bit more upbeat and fun, while his previous albums had a more low-key feel. Harry’s House is more pop-funk and it makes the album have more of a happy vibe. He still has a few signature sadder songs such as “Matilda” which is slower with a deeper meaning. Sophomore Joyce Allaf expresses, “I think his new album Harry’s House is really good…I like how like all the songs are sort of the same beat…I think it’s a very good collection of songs like there are sad songs, some happy songs, some like moody songs.”

Many people who don’t like the album or artist as much say that in a lot of his songs he just says random phrases. There is no meaning behind his songs and for that reason, they’re not good, for example in track 6 – “Little Freak” which is a love song, the lyrics say, “Jumped in feet first, and I landed too hard / A broken ankle, karma rules / You never saw my birthmark,” of course you could argue that this makes no sense.

But if you take the time to look into it, you’ll see that Styles really meant something in this. He is talking about rushing into a relationship too fast, “Jumped in feet first” is implying that he didn’t think about the relationship or situation before he decided to run with it. And with “Broken ankle, karma rules” he talks about how he got hurt initially from the relationship, and then later from “karma”. And the last verse is expressing how they were rushing so fast into this relationship that they didn’t take the time to notice the little things about each other because he has a birthmark on his hand which would usually be something you’d initially notice.

Joyce Allaf also shares, “I think because Harry’s like a really popular artist and they just like always want to find a reason to hate for absolutely no reason. So they’re like, ‘oh…his songs are so bad’. Like it’s not even that good. It’s like bare minimum…And yeah it might be bare minimum to you but to people who have like found him or, like, followed him for a long time and like they mean a lot to them. His songs are like home.”

Harry Styles fans have found more than just enjoyment in Harry Styles’ new album. They have found a home inside Harry’s House, a place where they don’t have to be sorry for leaving and growing up.