Jim McNamara: Alumni who are still passionate about North 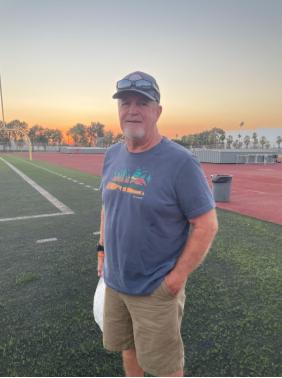 Former Athletics Director of 11 years, Jim McNamara, also known as Coach Mac, visited the Blue Star Regiment on August 18th, 2022. During their usual Thursday night practice, the band had been working expeditiously through their marching show when they were called for a break by their director, Mr. Jackson. Unaware of the surprise in store for them, the band listened as Jackson explained who Coach Mac was and cheered as it was revealed McNamara brought popsicles for all of the band to enjoy!

This pleasant surprise gave McNamara a chance to express why he does this for the school, “I taught my last 11 years here out of my 40-year career and it was the best school I was at. Mainly because of Ms. Porter ‘cause she’s the best. But, the kids are great and everything. I taught at Poly for 20 years, so my last 10 years, the last job I had was here at North and it was the best way I could have finished…”

McNamara’s gratitude for North shows how welcoming and kind this school is, even to people who just came to this school.

Some things that Mr. Jackson told the band were that he loved the band and appreciated all of their hard work each year. McNamara was also a very trustworthy staff member here at North, being the athletics director, he appreciated those who worked their hardest.

Though Coach Mac was the athletics director, he envies the BSR as well, as he stated, “When I became athletic director, I actually got to watch the band at halftime. When I was coaching, I never did, I was always in the locker room. I just got to appreciate how hard you guys work and all that. Mr. Jackson is a great guy and you guys deserve this. I called him up and said ‘Hey I’d like to do it again.’ I’ve done it for the football team once in a while too.”

Mcnamara is the true definition of Alumni because he comes back and appreciates everything at North. Mr. Jackson and the band greatly appreciated everything Coach Mac has done for them, as everyone here at North will always love and miss Jim McNamara!