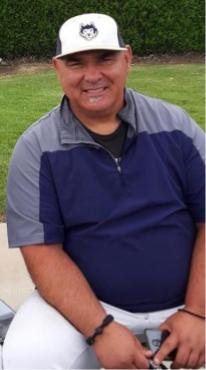 Richard “Chief” Cruz was born on March 9, 1967, in Fullerton, California. Chief, as he was called by those that knew and loved him, graduated from Sunny Hills High School in 1986. He attended Fullerton Junior College before signing a professional baseball contract to play for the Veracruz Rojos in the Liga Mexicana. In 1993 Chief was signed by the Chicago Cubs as an undrafted free agent. Chief never achieved his dream of breaking into the Major Leagues, which allowed him to do what he became best known for, being the best mentor and player-coach an adolescent could have. Before joining the coaching staff here at John W. North and reuniting with Coach John Noce in 2016, Chief had coaching stops at Servite High School, Westminster High School, and Santa Ana High School. Chief’s loyalty and sense of humor were unmatched and best described by all the current North baseball players as “the heart and soul of the team.”

“Chief meant so much to all of us players and was the person who made all of us laugh (coaching staff included) and smile when things were going bad. Chief was like an older brother to us all.  Each and every day, Chief brought light to every practice and every get-together. The guy we could always joke around with, and he’d always fire back at us with jokes of his own. We are so grateful and thankful to have been blessed with Chief to have around our program as a mentor and close friend. We all love you, Chief. All of us will greatly miss you,” said senior Joseph “Jojo” Guzman.

“Chief meant a lot to me personally. I remember being so nervous my freshman year and feeling down on how I played, but then Chief told me that he thinks I deserve to be with the JV and Varsity team, so that lifted my spirit and made me want to keep working so that the rest of the team could see that. Chief was the light when everything around was dark. He could make me smile at any time no matter what kind of day I was having. He was always so happy and supportive, under any circumstance. I will now miss him yelling my name from the dugout when I’m about to strike someone out or need to get a hit. But now Chief is in a better place and he will forever be in our hearts and a part of Huskies baseball,” said sophomore Adam Booker.

We tragically lost Richard “Chief” Cruz on February 21st. A void has been left in our hearts but the memories we created will live in our hearts forever. Rest in peace, dear friend.